Mr. H., our “contact person” at the property and asset management company Hermes, said to us, “you should just look for a new apartment if you can’t afford to pay the rent increase.” On April 1st the annual rent increase for the social housing units at Kottbusser Tor is made known. Residents are distraught considering they can even now barely afford the rent. And the job centre recently called for a cut in housing expenses. We made a request to the property management company that they forgo this year’s rent increase; however, the property manager turned down the request and claimed that, “if we waived this year’s rent increase we’d have to pay for it out of our own pocket.” Really? For the last thirty years the real estate company has been receiving Berlin taxpayers’ money so that affordable housing is made available in the city, yet will not waive a fraction of its rate of return, which is legally guaranteed to the company. Given the high profits reaped by these gentlemen, they just can’t imagine how empty our pockets are. After rent is deducted each month, every second family on the south end of Kottbusser Tor has per person 200 € left to live on.  And since April this amount has already dropped by 10 to 20 €. People are saving where they can, e.g., on food, or on cultural/leisure activities. Is the property management company looking to get rid of its long-standing tenants because it can now charge higher rents in Kreuzberg? We’ve been living here for generations. Our mothers and fathers, siblings, and friends live around the corner. We are Kreuzberg. Our home is here. The city has to start doing something to protect the residents of social housing and not the profit returns of the property owners! An immediate rent reduction should be introduced – non-bureaucratically and fast in order to prevent the displacement of tens of thousands!

Social housing is no guarantee for socially acceptable rents but rather for absurdly high profits for property owners.

Social housing in Berlin is an upshot of West German subsidy policies. Out of this well-known and complex history a legal situation has arisen that has guaranteed property owners millions of tax money over the last thirty years so that these same owners can also provide affordable housing. Today this task is no longer being fulfilled. These social housing costs are now even too high for the job centre to cover. Former Berlin Finance Senator Thilo Sarrazin paved the way in 2003 for an end to the support scheme and each year since subsidy programs have been dismantled. This affects most directly the tenants not the property owners. Yet the building owners can still demand the amount of rent needed to cover all the costs related to the property at the time it was built. In price per square metre this works out to 12 € to 15 €/m2. The tenants pay a part of this and the remainder is covered by the state of Berlin in the form of expenditure relief. For its part the city has been paying less and less and is demanding the repayment of the original investment loans from the existing tenants.

The highly driven rents were a part of the deal agreed to so that the so-called “write-off companies” would finance social housing. Without an entrepreneurial risk for investors and tax-savers, there would be a legal guarantee (since the 1970s) for securing high profits. For the good of Berlin these legal mechanisms need to be changed. For the time being however the property owners have a legal right to claim the rental amount. As a result of this legal situation private owners receive publicly subsidised rents up to 18 €/m2 (before utilities!) No other owners in Berlin can demand so much per square metre. As soon as the financial support disappears – like in the Fanny-Hensel neighbourhood or in the Werner-Düttmann Estate – landlords can start asking for such a high price and in turn most of the tenants will have to move out.

What kind of legal mechanisms are in place that guarantee private property owners the right to millions of our tax money? Why is the city/state of Berlin at the same time forcing owners to raise the rents? When today’s Red-Black Senate (Social and Christian Democrats, SPD and CDU) refers to new subsidies for new buildings in order to address the housing problem then we see the danger. The same mistakes made by the 2001 Black-Red Senate that precipitated the banking scandal could be repeated. Back then the government collapsed after it became public that Berlin was bankrupt because private owners were given loans and investment returns for social housing and the city could no longer pay. Berlin has still not financially recovered from this crisis and the high construction costs from the 1970s are still pushing the rents up. There are around 160,000 social housing units in Berlin. Today already 40% of the social housing rents are above the rent averages in the city. Currently the state/city of Berlin is the main party responsible for pushing up the social housing rents!

What is the local government doing for its thousands of residents who no longer can live from their pensions, for those who’ve worked hard but still earn too little, for those who don’t have “a good-paying job” (the advice the notorious Michael Braun/CDU gave)? What is the government doing for families with many children, for single parents with little income? – It’s raising the rents!

Worrying about the threat of being displaced upsets us and weighs heavily on us. It isn’t a good feeling worrying about how you are going to pay the rent. It also sad to lose neighbours you’ve known for years. But to make it clear: We like living at Kotti. That is because our friends, family, and acquaintances live here too. We support and take care of each other, and in doing so save the state paying for certain care services. We celebrate festive occasions together thus making Kotti a unique place. We are Kreuzberg – and not just since “poor but sexy!” became the Berlin slogan. We want to stay here!

The Kotti, Kreuzberg and the History of Migration

There are 1000 social housing units at the south end of Kottbusser Tor that belong to the GSW and the property management company Admiral-Grundstücks GmbH/Hermes. Every second family is paying 40-50% of their income to rent! We are one of the 16 so-called “problem housing estates” Category I, for which there was a cap on rent of 5.35 €/m2 until 2011.

Around 80% of the families at “Kotti” have Turkish roots. This is no coincidence. Our migration history to Berlin started with strict regulations: first, we were only allowed to live in dormitories and afterwards the recruited “guest workers,” our parents and grandparents, didn’t have the freedom to find apartments in areas they wanted. Due to the low wages they received they moved into run-down neighbourhoods on the periphery of West Berlin.

In 1989 when West Berlin’s political personnel celebrated the dismissal of East Berliners into a market economy, many of us got a stamp in our passports stating a “ban on entry and settlement in the district of Kreuzberg.” Our story with our rights being deprived and regulation in this society is a long one. We’ve made Kreuzberg our home. And we made it our home with all newly arrived groups, like the squatters and alternative scene of the 1980s, the green bourgeoisie in the mid-90s, and the artists and students in the last few years. We’re proud of this mix –we made Kreuzberg attractive after all.

What does displacement have to do with racism?

The state secretary in the Berlin Senate Department for Urban Planning Ephraim Gothe told us at an event that we helped to organise at the Berlin Parliament Building (on Feb. 29, 2012) that Kotti needed more “intermixing.” Other politicians have uttered similar things.  It’s madness how visions and urban policy strategies in politics come about without even talking to the people who live in the areas directly affected, without even getting their perspectives. We replied that this “intermixing” is for all intents and purposes a displacement of the long-standing residents who have been living here for decades. We’re already a fantastic mix of people! We asked the city planners who, exactly, did they want to intermix? Why are our retirees, who are being “mixed out,” and the generation of migrant labourers who came from Turkey to work in the 1960s, receiving such a small pension that they can no longer afford to live at Kotti? They helped rebuild the Federal Republic – and received already back then a pittance of a wage – and now their pensions are not enough for them to enjoy and live out their golden years in a familiar environment. In our opinion, the fact that our civil engineers, our doctors’ receptionists, or our programmers can only get poorly paid positions and must complement their wages at the job centre is systemic racism on the job market. Is the discriminatory system, which is the foundation of this country’s immigration policies, further evident on the housing market? We keep hearing from the job centre that if we can’t afford our rent we can just move to Marzahn. When we answer that with or without a headscarf we can’t go out onto the streets, the job centre people tell us that is not their problem.  But we know there is a problem of safety in many eastern districts of this city. At the very latest since the murders in Solingen and Mölln and the pogrom in Rostock, we recognise that there are certain places in both western and eastern Germany that we should simply avoid for our own safety. Everyone can report attacks that have taken place. Ever since the NSU (neo-Nazi extremist group) murders became known is has become even clearer: the problem of murderous, violent racism is not a thing of the past. No-Go areas are still a reality for many people.

When the SPD-CDU government claims that the problem of affordable housing should and can be solved by the municipal housing associations and incidentally mentions that most social housing units are in the eastern part of the city –that is in areas that are dangerous not only for us – then the government is at best ignorant. (And not leave out another issue: there are areas in the western parts of Berlin where we are also not welcome). The state/city of Berlin must take responsibility for its residents being displaced by the current housing policies, and recognize that these residents could be threatened by potentially worse things. We are and want to stay Kreuzberg!

Our Demands to the City/State of Berlin:

We are fighting against displacement and for our rights to the city! We ask that the political leaders start negotiating with us. We send our greetings to all Berlin tenants – social housing and non-social housing – and of course to our neighbours and friends from the system of market-rent. It’s about time that “poor but sexy” is replaced by “stop the increase in rents!” and “nothing is impossible!” 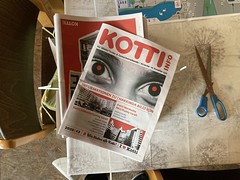 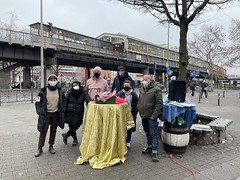 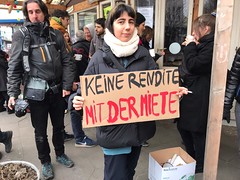